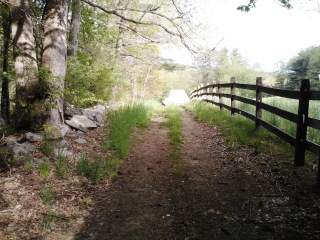 Yesterday I spent the day unpacking the kitchen. I’m still far from done! I have a challenge of getting a lot of stuff in a small space (we really didn’t think we had that much, we were wrong). We don’t have a pantry but we have an amazing amount of space in the barn to use, should the need arise. We’ll just have to figure out how to “critter proof” everything we decide to store out there.

I took a break from unpacking at about 2:50 pm to do our 3pm chores. I went out and fed the dogs and horses, as usual. When we were done my daughter asked if she could return inside to watch “Love’s Enduring Promise.” I agreed and she took the dogs inside with her. Meanwhile, I set about to unload our horse tack and other items from the horse trailer into the tack room. I had just put the last item in the tack room when my daughter came to the top of the deck and waved my cell phone. I returned inside to take the call. I was on the phone for at least 40 minutes. It was a good call, lots of info for my local networking endeavors. After the phone call I headed over to the kitchen window for a quick glance over the barn, etc. and I notice something … odd. I see two horses down at the barn… outside of a fence. My two horses, that were supposed to be in the upper pasture are standing, outside a fence, behind the barn!! I grab my jacket as it was a bit chilly for a May for any Texas girl, and jetted, calmly, to the barn. I happened to have been eating an apple so I figured that might come in handy to persuade said horses to do my bidding in this moment of supposed freedom. I tried to get them to follow me, I did not have their halters in hand, only an apple. I knew exactly where their halters were because I had just hung them in the tack room, I simply did not grab them because I figured the apple would be an easy catch. Well it didn’t work but the good news is that they were not inclined to run away anywhere at this point. So now, my daughter arrives on scene because last she heard was me saying, “the horses are OUT!” as I made a mad , but calm, dash for the barn. I ask her to retrieve the halters and at that moment the horses think, “maybe we should make run for it.” Prior to this they are simply standing there and nosing about the outside of the barn. I wave my apple and split the core in two and beckon them to stay. They do! We slip their halters on and take them to the arena for a jaunt and as a holding place until we figure out where they made their escape from. The horses enjoyed racing around the arena unimpeded at full gallop. They are so out of shape and the sand in the arena quickly wears them out. I will have to video Justice in a full gallop in the arena, he is breathtaking! Little Sky looks incredibly cute as well. So while they exercise in the arena we check ALL the gates. There are about 20, just kidding, actually there are like 8 I believe in the upper pasture. Well thought out in my opinion. It would be easy to split the pasture into separate areas if you had multiple horses or other critters to house. It’s great, no complaints here. I grabbed more chains and clips from the barn to ensure I had enough to fix the trouble. We hiked up the hill to the manure pile, we found what we believe to be coyote scat up here just a couple of days ago.

This marks the end of the fenced horse pasture. Then we walked downhill checking the security of the fence and each gate. They were all fine except one. Apparently the chain was left but the clip was taken by the former tenants. There were three of us out there when we put the horses out and so it seems that we all assumed the each other had checked this gate. So the horses, they like to bump the gates with their noses. Just to see if they’ll open. This one did and they simply walked out. I’m soooo thankful that they did not take off! I think they are a little worried about the woods.

We went back to the arena where the horses were exercising. They were quite done. Breathing heavy and a little sweaty. We took them back down to the barn and groomed them and fly sprayed them. I notice that Sky had two ticks crawling on him when I first caught him at the barn. Then we sprayed our clothes with Deep Woods off. Sky gave me his “Mr. Ed” face for that smell, haha, and then we took the boys out for a walk in the woods. No saddles, only a lead rope. We wanted to show them the place. We got to a little wooden bridge in the woods that covers a small brook. The brook had some stones in it. The horses were like “maybe we should go back now.” Instead we sat there for 20 minutes trying to convince them that they really wanted to cross the brook. Neither one of them had been across a bridge ever, but they had gone over a “faux” stream at our former home in Lockhart, TX when we build a trail course. They did not want to go through the actual water. I didn’t blame them, the footing was unsure because of the smallish rocks. We were persistent and with much persuading on our parts with only praise and tufts of grass the stepped across and then back again! We had treats with us but the horses did not desire them at all. We offered but they snubbed their noses at them. When we were in Texas they could not get enough of them. I guess the lush green grass here is more than enough. Wave that in front of them (plus an apple) and they will do just about anything for you, just about.

Today was a quiet day, we had the pest inspector out to do a recheck. They’ve already done all of this, but because of our delay it all has to be done again. Our livestock guardian is doing much better. He is getting stronger each and every day. We’re praying for him! Tune in next time… God bless!

Oh, I almost forgot!! I saw this snake this morning… comment me if you know what she is. I have another pic of her coiled up from the other day but I can’t seem to locate it on my computer. I spied her today, sunning on a rock up by the house. 🙂 (I took a pic and will add it later, internet is crawling, it loaded on FB, so my FB friends can see it. Sorry Blogger.com followers!!)

We are a small family of 3 and a bunch of critters.We love God, our Country and it's foundations. We made a BIG move from Texas to Massachusetts in May 2013.This blog captures our 'new' life, there is never a dull moment. There is a lot of charm and character in this place and I plan to unveil it all and bring it to you in the painting presentation of word pictures and more.
View all posts by Maritza →
This entry was posted in Adventure, drama, Family, farm, farm life, God, horses, Prayer, Protection, Uncategorized and tagged escape, horses, open gates. Bookmark the permalink.

3 Responses to Unpacking and Checking fences